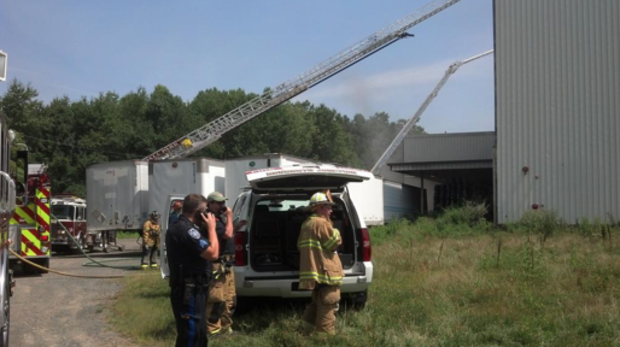 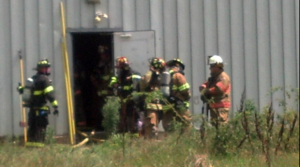 A fire at a local warehouse went to 2 alarms Saturday as firefighters from five communities were called to battle the blaze. The Monmouth Junction Volunteer Fire Department was dispatched at 11:13 AM to 925 Georges Road, Nuvida Plastic Technology, for a structure fire. Arriving firefighters and police officers discovered a working fire in the rear of the two and a half story warehouse. Firefighters made an aggressive interior attack which quickly contained the fire to a corner of the warehouse used to store plastic materials.
Over 60 firefighters responded to the two-alarm fire. Monmouth Junction Fire Chief Scott Smith said, “The plastic material was stored in cardboard boxes on wood pallets which created a challenge to get to the seat of the fire. There was extensive overhaul need to ensure there was no remaining hot spots”. Responding to the warehouse blaze were the Monmouth Junction, Kendall Park, and Kingston Fire Companies from South Brunswick, as well as firefighters from Brookview, Cranbury, Jamesburg and North Brunswick. The Little Rocky Hill and Franklin Park Fire Companies stood by to cover the township while crews fought the fire.