The Kingston Volunteer Fire Company No. 1 (KVFC1) was founded in 1924 and is located in Kingston, NJ.  We provide fire suppression and rescue services to the Village of Kingston and surrounding areas in South Brunswick Township (Middlesex County) and Franklin Township (Somerset County), and provide mutual aid services to surrounding fire departments when requested.  The KVFC1’s primary coverage area is Fire District 3 in South Brunswick and Fire District 4 in Franklin.

The KVFC1 operates out of one station with three pumpers, one rescue truck, one special services vehicle, one utility vehicle, one rescue boat, and two command vehicles.  We also maintain our 1939 Ward LaFrance pumper in operating condition for special events.  Volunteers respond around the clock, and South Brunswick Fire District 3 staff members assist with coverage during the daytime on weekdays. 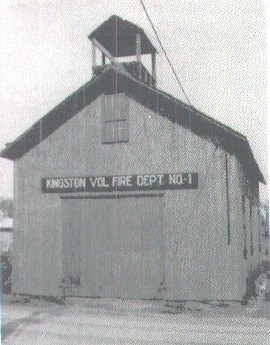 The Village of Kingston has a long history of volunteers providing fire protection. While many of the early records documenting this history have been lost or destroyed, there is record of an ACT by the New Jersey State Legislature approving the incorporation of the Kingston Fire Engine Company on February 24, 1834. Exactly how long the Kingston Fire Engine Company stayed in operation is unknown. What is clear however is that there was no active organized fire service in the village when tragedy would strike in the winter of 1924….

The Fire that Revived KVFC #1

On Friday February 29, 1924, at the invitation of a specially appointed Fire Committee of the Kingston Improvement Society, about twenty interested citizens met in the South Brunswick Township Schoolhouse to discuss the recent fire in town and the advisability of again having fire apparatus in Kingston.  The following is excerpted from the minutes of that first organizing meeting and those that soon followed:

A recent fire on Main Street, which started in a retail store and spread to the neighbors, had cost two families their homes and the lose of the business where the fire originated. The men of the town gathered — determined to be ready the next time fire reared its ugly head in the town of Kingston.

Three members of the Princeton Fire Department were present to help answer questions — Chief Joseph Briner, Mr. W. L. Briner, and Past Chief Kerr. The minutes note, “Chief Joseph Briner gave us some first hand advice and told some amusing tales of fair ladies who left their keys inside and called up the fire company for a ladder to get in their window. He urged loyalty to the Chief since he had authority to go ahead with responsibility…”

The organizing men were eager to take action. Before the gavel came down closing the first meeting they had:

The second organizing meeting of the fire company was held less then a week later, on March 6, 1924. It is noted that 18 men had signed up and paid dues, and already the first voices of dissension were being heard. The minutes say, “President Shaw made a few remarks stating that it had come to his ears that some dissatisfaction had arisen due to the fact that the original meeting consisted of picked members rather than of a representation meeting of all people interested.” President Shaw went on to explain his appointment as Chief by the Improvement Association and offered to resign if the men present wished. After some discussion, the members present held a new election of officers. 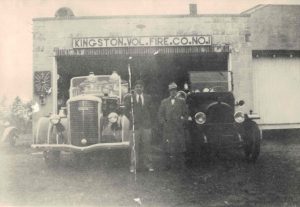 Another milestone was also achieved at this second organizational meeting, as reflected in the minutes. “By invitation, the American LaFrance agents, who had been called upon hitherto many times for suggestions, were now called upon to tell us about their machine and proposition.” Mr. Williams of American LaFrance presented information on a “Three tank, two hose equipment, mounted on a Brockway chassis” which would cost $4,150.00. After many questions were asked and answered, President Flemer appointed a committee (Chief Lester Shaw, Foreman Ben Stewart, and William Woolf) to confer with the American LaFrance agents. Kingston was on its way to having its first fire truck. The members even decided that the Presbyterian Church Bell would be used to alert members of a fire call — “and anyone hearing it ring at off times, would know what it was for.”

The fourth Company meeting convened on April 3, and the Purchasing Committee reported they had arranged for the purchase of an American LaFrance Type 3 Triple Tank Chemical Combination CO mounted on a Brockway Torpedo Chassis. The committee signed the contract for the purchase of the truck on March 26, 1924 at a cost of $4,000.00. The terms of the contract reflect a payment of $1,000.00 due 10 days after receipt of the vehicle, and four annual payments with 6% interest per annum.

The fire company membership would not accept the terms of the initial signed contract since it called for delivery in 90 working days. (The fact that a legal contract to purchase under these terms was signed by all parties on March 26, 1924, did not seem to present the problems we would expect today.) This meant that delivery of the truck would not be until after the planned July 4th carnival. The Secretary was asked to follow up on this concern, and received written verification that delivery would be “started” June 24, 1924.

At last, the big day arrived, and the “machine” (as referred to by Secretary H. Lloyd Haupt) was delivered to Kingston by railroad car on June 11, 1924. The first drill with the new truck was held on June 19 at the Gulick’s Barn, and the minutes note “it was greatly enjoyed by all.”

As the year progressed more equipment was purchased and additional members joined the ranks. In all, the names of 62 men would be on the rolls by the time Charter Membership was officially closed.

And so begins the history of The Kingston Volunteer Fire Company Number 1.

The Kingston Volunteer Fire Company No. 1

The men were very busy during the first month as they would meet again on March 20th.  They accomplished a lot in those few short weeks.

Chief Shaw suggested at the April 17 meeting that four hand fire extinguishers be installed in strategic locations throughout the town. Chief Shaw obtained approval of the property owners in advance of the meeting, and the members approved the suggested placement of the fire extinguishers:

An additional note to the minutes of April 17, 1924, records the first drill of The Kingston Volunteer Fire Company Number 1. “One of the Fire Extinguishers belonging to the Machine was tried out with great success on a pile of burning boxes over by the Graveyard wall.” A drill with a fire extinguisher from a truck that had not yet been delivered, and for which no payment had yet been made. Amazing, how times have changed.

There is a reference in the minutes of the May 1 meeting of Princeton Fire Department and Rusling Hose Co. having responded to a fire in Kingston. In fact, this is the first record of Mutual Aid received by the fire company, and it notes in the minutes that both companies returned “their share of the money recently collected and sent to them for responding to our fire.” Thanks to both fire companies for contributing to the new truck fund in Kingston.