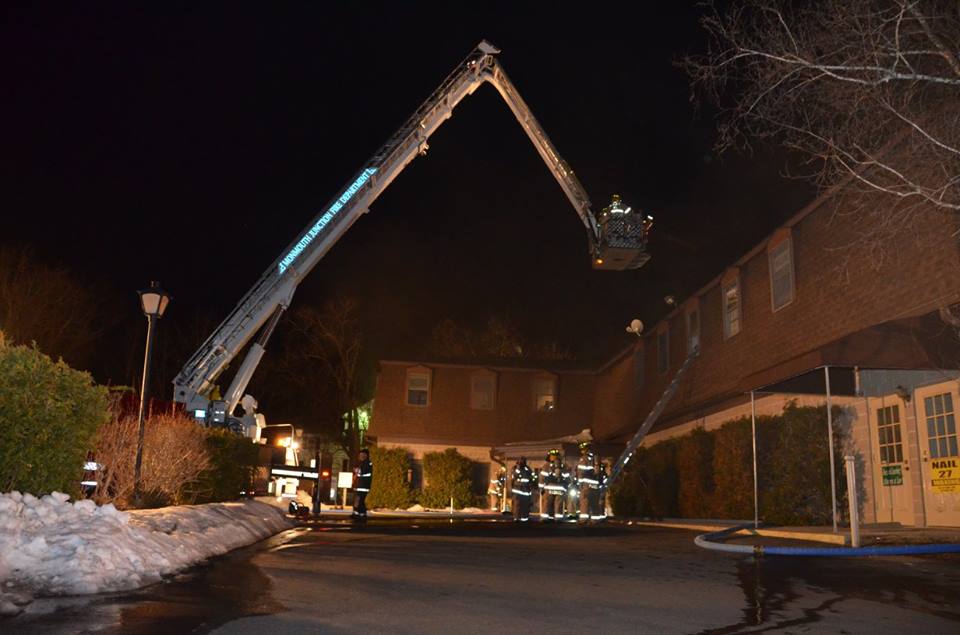 Kingston Fire Department responded as part of the first alarm assignment for an office fire at 3176 Route 27 in Kendall Park on Monday night.

At 10:45pm South Brunswick Police received two 911 calls from motorists traveling on Route 27 reporting smoke coming from an office building.  Reports from arriving Patrol officers confirmed smoke coming from the two story office building but no visible fire.  Kendall Park Fire Department Engine 221 and Ladder 223 were still enroute at that time, and upon hearing the patrol officers’ reports, Captain Nick Berezansky requested his back-up company be dispatched.  Upon arriving on scene, Captain Berezansky observed the heavy volume of smoke coming from the building and upgraded the assignment to a full first alarm.

Kendall Park Fire Chief Chris Perez later stated, “The smoke was pushing out from the roof eaves and enveloping the building on arrival of the first units. They made entry and were able to contain the fire to a first floor chiropractic office. The building which housed 9 offices suffered extensive structural damage”.

Units from the Plainsboro Fire Department and North Brunswick Fire Company #3 provided coverage for the remainder of South Brunswick while Township crews operated at the scene.

The Kendall Park First Aid responded to the scene and provided rehab services for the firefighters and no injuries reported.

The fire remains under the investigation of the South Brunswick Fire Safety Bureau.