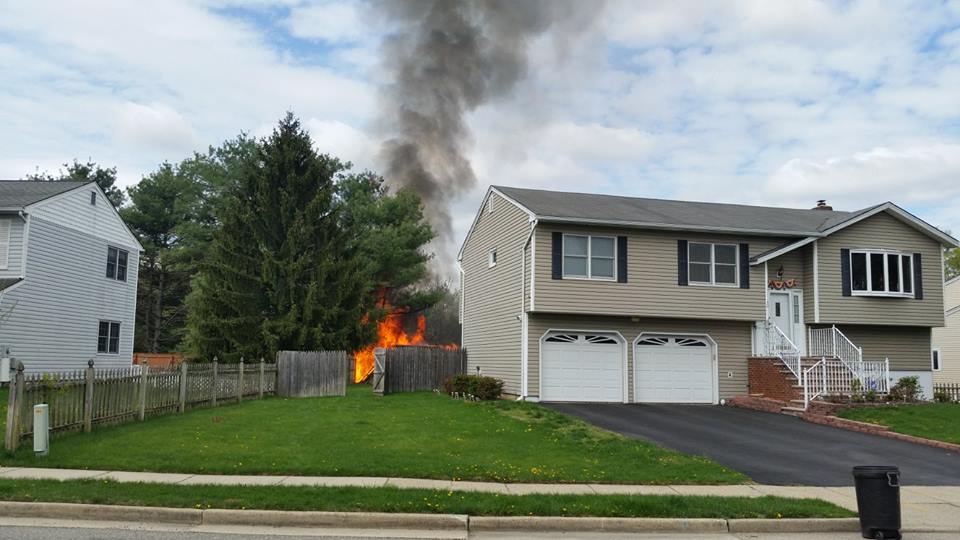 Just before 11am today, the Monmouth Junction Fire Department was dispatched to the area of Rebecca Court for a possible brush fire.  Arriving in the area just a few minutes later, Monmouth Junction Fire Chief Scott Smith saw a large column of smoke coming from the large pine tress in the common area located behind the homes along Stanley Avenue, Rebecca Court and Edith Court.  Chief Smith requested an additional engine from Kendall Park Fire and proceeded down the road to investigate further.

As he now arrived at 10 Rebecca Court, Chief Smith observed that the fire was involving a pool shed and the fencing located behind the residence.  He immediately requested a general alarm bringing additional resources from the Kingston Fire Department to the scene as well as additional departments to cover the town.

As the entire shed was quickly being consumed, Chief Smith directed Lieutenant Mike Grennan and his crew from Monmouth Junction Engine 208 to stretch an 1-3/4 inch hose-line to the rear of 10 Rebecca for extinguishment.  He simultaneously instructed New Jersey State Forest Fire Unit B-10 and District Fire Warden Trevor Raynor to relocate to Edith Court and see if access could be gained from that location.  He then assigned Kendall Park Chief Chris Perez with the supervision of the crews on Edith and appointed Kendall Park Deputy Chief Rob Cioffi as the Water Supply Officer.  The two crews under the directions of the two Chiefs were able to promptly get their hose-lines deployed and quickly had the fire under control. As Kendall Park Engine 221 and Kingston Engine 243 arrived, their crews assisted with the extinguishment and overhaul operations, while the two engines supplied water to Engine 208 under Deputy Chief Cioffi’s direction.  With the quick hard work by all involved, Chief Smith was able to free up resources and canceled the cover companies prior to their arrival in town.